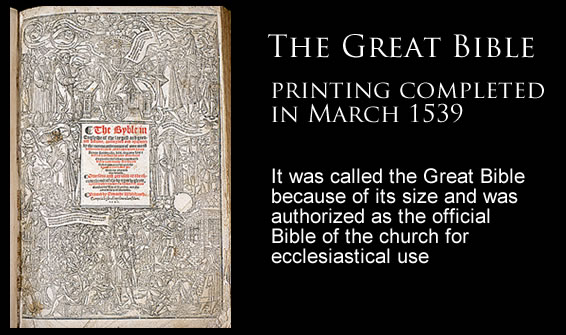 The Great Bible owes its origin to the desire of William Tyndale to provide the English ploughboy with the Word of God in his own language. This desire was reiterated in Tyndale’s last words, “Lord, open the eyes of the King of England.” Those stirring words were uttered outside the Vilvorde Prison on October 6, 1536 when William Tyndale was strangled and his body burned.

During the time Tyndale was held in the Vilvorde Prison, his friend and co-laborer, Miles Cloverdale, superintended the printing of the first complete English Bible in 1535. Coverdale used Tyndale’s translations of the Pentateuch and the New Testament while he himself translated the remaining portions of the Old Testament and the Apocrypha using Latin and German Bibles.

A year after Tyndale’s death, John Rogers, using the pseudonym of Thomas Matthew, published what is believed to be the first licensed English Bible. The Matthew’s Bible incorporated Tyndale’s translation of the books from Joshua to II Chronicles for the first time. The Matthew’s Bible was published in 1537 and Miles Coverdale printed a second edition of his Bible in the same year. Thus by 1537 the English people had two complete English Bibles.

Meanwhile, King Henry VIII changed his mind regarding the distribution of the Bible in English. Not only did he permit the licensing of both the Matthew’s and the Coverdale Bible, he ordered that every church in England have a copy of the English Bible for use in the worship services.

Thus in November 1538 he issued a decree through Thomas Cranmer, the Archbishop of Canterbury, that every church in England should have a copy of the English Bible in the largest size. Miles Coverdale was chosen to supervise the editing and printing of this edition. Coverdale chose the Matthew’s Bible of 1537 as the basis of the revision rather than his own edition of the same year. This gives us insight to the motives of the early English translators. They had little interest in putting forward their own work. They had a greater interest in providing the most accurate translation. This is also an indirect proof that John Rogers, the editor of the Matthew’s Bible, limited his involvement in Bible translation to the production of the Matthew’s Bible. There is no record that he had any further involvement in the work of Bible translation.

For reasons that are not totally clear, Coverdale decided to have this edition of the Bible printed in France although there were English printers capable of producing it. Some have speculated that the French printer, Francis Regnault, was more capable, had better presses and workmen, etc. than the English. While we cannot be certain of this, there may be a clue that determined his choice. Coverdale had prepared a diglot New Testament in English and Latin that he gave to James Nicholson to print. The work was so badly done that Coverdale refused to recognize it as his work and ordered that it be withdrawn and all copies destroyed. However, Nicholson had it “corrected” and reprinted it! He went so far as to attribute the work to another editor, John Hollybush! However, even this “corrected” edition was replete with errors. Finally, Coverdale had Regnault print the diglot in 1538. A quick comparison of the three editions of the same work will readily establish the superiority of the French printer.

Meanwhile, work began on the Great Bible in Paris. As stated above, the basis of the revision was the Matthew’s Bible of 1537. However, it was soon rumored that an English Bible was being printed in Paris. This aroused the opposition of the Sorbonne, the theological faculty of the University of Paris. Complaints were made to the head of the French inquisition and King Francis I. Orders were issued that the work was to cease immediately, what had been printed was to destroyed, and the printers and Coverdale were to be arrested and turned over to the Inquisition.

Fortunately, Coverdale was able to escape the clutches of the Inquisition and return to England. However, he did not escape alone. He managed to bring the presses, the printers, and a large supply of what had already been printed back to England. How he was able to manage this is simply amazing. It is one of those instances when the providence of God opens ways that are beyond human understanding.

Once back in England the work at the press of Edward Whitchurch and Richard Grafton went forward. The printing was finally completed in March of 1539. It was called the Great Bible because of its size and was authorized as the official Bible of the church for ecclesiastical use.

The subsequent history of the Great Bible is a story in itself. It quickly went through seven editions by 1541. The second through the seventh editions are called Cranmer’s Bible because they contain a preface written by Thomas Cranmer. It has also been known as the “Chained Bible” because it was chained to a lectern in a church and readers appointed so that people who were illiterate could come and hear the Bible being read. It became so popular to listen to the reading of God’s Word that people would come during the times of services at the churches to hear the words of Scripture and would not attend the services! Finally, Cranmer had to issue an order that forbade the reading of the Bible during the times of stated services. That illustrates the depth of hunger that people had to hear the Word of God.

The printing of the Great Bible marked the close of the first phase in the translation of the Scriptures into the English language. The Great Bible would be printed continuously until Queen Mary’s ascension in 1553. Mary herself made a contribution to the Great Bible by translating a paraphrase of John’s Gospel originally written by Erasmus. Although she had an edition of the Great Bible destroyed early in her reign, she did not forbid the possession of the Bible and declare it illegal as had the Constitutions of Oxford in 1408.

When Elizabeth became Queen, the printing of the Great Bible resumed. It was printed at intervals until 1568 and remained the standard ecclesiastical text of the English Church until it was replaced by the Bishops’ Bible in the same year. The Puritans had hoped that the Geneva Version would become of official ecclesiastical Bible but Elizabeth refused to authorize it.

In addition to the intrinsic value of the Scriptures, one can also learn of the political and ecclesiastical conditions of the times by studying carefully the title pages of Bibles. In the first edition of the Great Bible, the title page shows King Henry VIII giving the Bible to Thomas Cranmer, the Archbishop of Canterbury and Thomas Cromwell, the Lord Chancellor. In turn they are pictured as giving the Bible to the people. The three individuals are identified by their coats of arms that appear below their images. In the fourth edition, however, the title page is distinguished by the absence of Cromwell’s coat of arms. He had fallen out of favor with the King when he advised Henry to marry Anne of Cleves. Cromwell was later accused of treason and executed. However, although the title page still contained his figure, a blank space appeared where his coat of arms should have been!

There is yet another irony found on the title page of the Great Bible. In later editions, words appear that affirm the Bible had been overseen and read by two officials of the English Church. Those officials were two bishops: the first was Nicholas Heath who was the Bishop of Rochester and the second was Cuthbert Tunstall, now the Bishop of Durham. This was the same Cuthbert Tunstall, who, when Bishop of London, refused to permit Tyndale to translate the Scriptures. Now he gave his authorization to the Great Bible as being an accurate translation of the Word of God. In the Great Bible, the books from Genesis to II Chronicles and the entire New Testament were the work of William Tyndale. Although Tunstall had initially refused Tyndale’s request to translate the Bible, he now gave his sanction to his translation. It would be interesting to know if Tunstall ever regretted his decision to refuse Tyndale the opportunity to translate the Scriptures. Whether or not he ever did, it is certain that he authorized Tyndale’s translation as the Word of God!