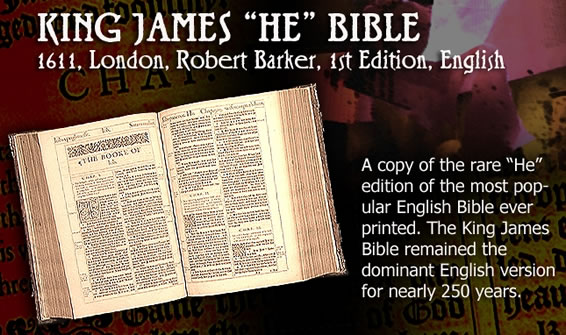 What can you tell me about the history of the King James Bible of 1611?

The printing of the King James Bible was a compromise solution to a situation where two translations of the Bible were in competition. This took place in the following manner.

Although William Tyndale was the primary translator of the English Bible, the work was carried on after his death by a number of people. Miles Coverdale printed the first complete Bible in English in 1535 while John Rogers was responsible for the Matthew’s Bible of 1537. A revision of the Matthew’s Bible was printed in 1539 and called the Great Bible.

During the reign of Queen Mary Tudor in the 1550’s, a number of Protestants fled England to avoid religious persecution. Several of them, including William Wittingham, Thomas Sampson, and Anthony Gilby, settled in Geneva. While there, they determined to do a revision of Tyndale’s New Testament. They were fortunate in having access to the third edition of Robert Stephanus’ Greek New Testament and the help of Theodore Beza, a friend of John Calvin and a noted Biblical scholar. In 1557, William Wittingham printed what came to be called the Geneva New Testament. The Geneva New Testament was the first printing of the English Bible that included verse divisions.

Although Mary died in 1558, Wittingham, Sampson and Gilby remained in Geneva to complete a revision of the Old Testament. Their work on the Old Testament, along with a revision of the Geneva New Testament, was printed in 1560 by Rouland Hall and entitled the Geneva Bible. Although the scholarship and purity of English found in this Bible were of the highest quality, the editors added marginal notes that disputed the claim of English monarch to rule by divine right.

Elizabeth I, who became Queen of England after the death of her half-sister in 1558, was a staunch advocate of the right of divine rule. Thoroughly dissatisfied with the marginal notes in the Geneva Bible, she refused to allow it to be used in the churches. At this time the approved Bible for ecclesiastical use was the Great Bible of 1539. Elizabeth ordered her Bishops to do a revision of the Great Bible that was completed in 1568. This revision was known as the Bishops’ Bible because eight of the Queen’s Bishops participated in the work. The Bishops’ Bible received the royal sanction as the official bible of the English Church.

However, this new edition failed to achieve popular acceptance. The Bishops’ Bible was inferior to the Geneva Bible both in scholarship and linguistic eloquence. This difference in excellence was reflected by its lack of popularity. Within a few years, the Geneva Bible had gone through eighty editions while the Bishops’ Bible struggled to attain to eighteen editions.

This was the situation in 1603 when James VI of Scotland became the King of England. The Puritan Party in the English Church saw an opportunity to win the favor of the new monarch. They asked for a conference to be held with the king to discuss the ecclesiastical situation. It took place in 1604 at Hampton Court Palace in London.

The Hampton Court Conference proved to be disastrous to the Puritans. All but one of their requests was rejected. The one petition of the Puritans that James granted was that a new translation of the English Bible be undertaken to settle the differences between the Geneva and the Bishops’ Bibles.

James established three rules to govern the work of translation. No marginal notes were permitted except to explain the meaning of the Greek words. Ecclesiastical words such as church and priest were to be used to translate their Greek counterparts. Tyndale had never used the word church in his editions of the Bible because the word at that time only applied to those who had taken vows to the religious establishment. Tyndale used the word congregation to translate the word in the original language, thus underscoring the biblical teaching that the church includes all who have personal faith in Christ, not just those who have taken holy orders. James’ third rule was that the Bishops’ Bible was to be the basis of the translation and it was to be corrected only to bring it into greater conformity to the meaning of the original languages.

Three committees were formed to undertake the work of revision: one at Westminster in London, one at Cambridge University and the third worked at Oxford University. The committees labored on the task for nearly seven years. A committee from each of the three groups met together to revise the translation. The committee approach to the work of translation assured that the new version was accurate. In 1611, Robert Baker printed the new revision.

There was, and is, much to admire about the King James Version. Many of the scholars who worked on the translation were among the finest in Europe. The omission of marginal notes allowed the reader to concentrate on the biblical text itself. The translators gave special attention to the English thus assuring that the Bible read well when used in church services. Although printed nearly four hundred years ago, the English still reads with a diction and stateliness that has not been equaled. While the King James Version contains some obsolete words, when read aloud by a skilled reader, its beauty of expression is unequaled. The beauty of language was due to the work of William Tyndale. Eighty-five percent of the words in the New Testament portion of the King James Bible were the work of William Tyndale.

However, what finally decided the issue in favor of the King James Bible had little to do with the relative merits of the two translations. After the death of King James, his son Charles I ascended to the throne. Charles appointed William Laud, who had been Bishop of London, to the see of Canterbury. One of Laud’s first orders was to forbid the printing of the Geneva Bible in England to assure uniformity of Bibles. At first, this did not cause any difficulty because it was easy to procure copies from overseas. However, Laud issued an edict forbidding the importation of the Geneva Bible because it would cause economic hardship to British printers. The last printing of the Geneva Bible was done in Amsterdam in 1644.

However, formal and ecclesiastical recommendations lose their significance before the court of public opinion. With the inaccessibility of the Geneva Bible, the English-speaking people embraced the King James Version.

Today, even when there is an abundance of English translations of the Scriptures, the King James Version continues to hold the loyalty and affection of a large segment of the English-speaking people.