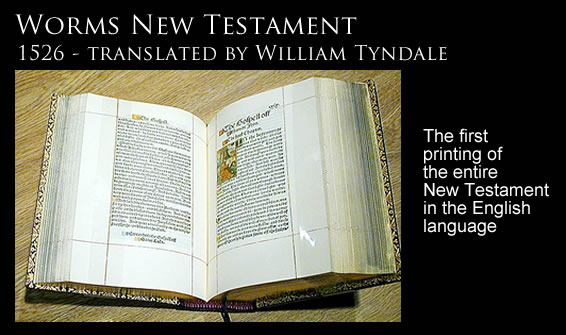 The providential care of God over His Word was aptly demonstrated by a discovery at the Wurttembergishe Landesbibliothek, Stuttgart, Germany in 1996.

The directors of the Library were reclassifying their holdings of English books when they came across a book that they were unable to identify. Figure one shows the outside cover of the book with the engraving of a person with the date of 1550 clearly discernable. It was an English New Testament but there was no clear evidence of the date of publication. A careful check of reference books listing the publication dates of English Bibles failed to provide positive identification.

After consulting the staff at the British Library it was conclusively proven that it was a 1526 Worms New Testament, the first complete printing of the New Testament in the English language.

What made the discovery of an English New Testament printed in 1526 such an important event? To answer this question, we must put this New Testament in its historical context. William Tyndale left England in late 1524 or early 1525 and settled in Cologne, Germany with the intention of translating and printing the English Bible. At the time vernacular copies of the Scriptures were forbidden in England. His efforts to have the printing done in Cologne were interrupted and Tyndale fled to the city of Worms.

There in 1526 the first New Testament, printed in English and translated from the original Greek, was completed in the print shop of Peter Schoeffer. Estimates of the print run vary from three thousand to six thousand. Of the initial printing, in 1996 only two copies were know to have survived. One copy, located at Saint Paul’s Cathedral in London lacks nearly one hundred and forty pages. The second copy, purchased by the British Library in 1994 from Bristol Baptist College, lacked the title page.

The Stuttgart copy was complete, including the title page. This was the only copy of the Worms New Testament that had survived intact. For that reason alone, its discovery was a newsworthy event.

However, the record of its history provides a fascinating account of how God providentially preserves His Word. There are some gaps in the record but the main outline of the story appears to be as follows.

In 1550 the New Testament came into the possession of Ottheinrich, a territorial prince of the Palatinate. From other books in his library, it appears that Ottheinrich had the custom of having the accessions to his library rebound with an engraving of his likeness and the date. Thus we are led to believe that in 1550 the book was purchased and placed in Ottheinrich’s personal library.

What happened next cannot be proven beyond the shadow of a doubt, but evidence indicates that the New Testament was taken during the Thirty Years’ War that raged in Germany from 1618 to 1648. It appears that the New Testament was actually taken to Rome and placed in the Vatican Library. Following the peace of Westphalia that ended the Thirty Years’ War in 1648, it was brought back to Germany and placed in a monastery in Schontal. The words Monastery B.M.V. in Schontal are clearly written below the title of the book.

From there it was transferred to the Landesbibliothek, Stuttgart early in the 20th Century. It remained there until the Second World War. Because the city of Stuttgart was a prime manufacturing center for the German war machine, Stuttgart was placed high on the list of Allied bombing targets.

The Landesbibliothek officials, fearful of a bombing raid, decided to move the books to a safer location outside the city. Although the exact details of what happened cannot be stated with absolute certainty, it does appear a number of books were transferred before the German military forced them to stop because of the impact upon the city’s morale. If the citizens of Stuttgart saw the books being removed due to the apprehension of an attack on the city, their morale would plummet.

In the event, Stuttgart was bombed and the Landesbibliothek was destroyed with the remaining books and records. However, a number of books had already been removed to a safer location including the Worms New Testament.

The Landesbibliothek was reconstructed following the end of the war and the books that had been hidden in the forest were retrieved. However, the library’s records had been destroyed and no one knew exactly the contents of what had been spared.

The Worms New Testament apparently remained unnoticed and unclassified on the shelves for a number of years until the reclassification took place. What an amazing story of God’s providence is illustrated by the preservation of that book!

Can we not learn some practical lessons from this incident?

The great lesson we can learn from this sole complete copy of the first New Testament in the English language is that God does watch over His Word to both preserve and fulfill it. Should this not be an encouragement to us to study that Word? Perhaps we will never know who read that New Testament. We can only hope that all who possessed it beginning with Prince Ottheinrich, those who were in charge of the Vatican Library, the monks who lived in the monastery, and even the personnel of the Landesbibliothek itself not only classified the book but read and understood the words of eternal life that it contains.