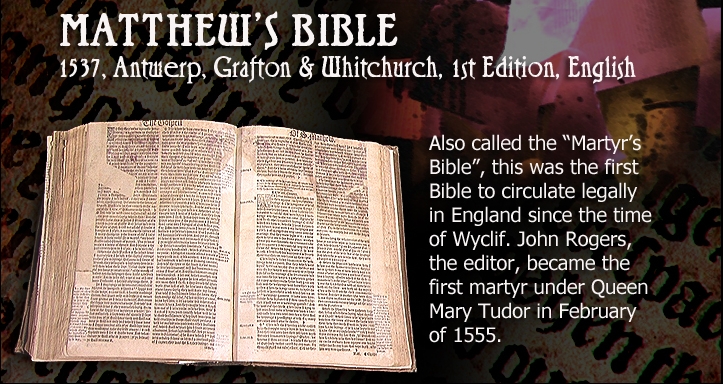 Due to the Constitutions of Oxford that passed in 1408 under the direction of Thomas Arundel, the Archbishop of Canterbury, translations of the Bible into English were forbidden. This action was in response to the work of John Wyclif under whose supervision the entire Bible had been translated from the Vulgate into English. For the following one hundred and thirty years, this prohibition would remain in effect.

However, this did not prevent copies of Wyclif’s Bible from being copied and circulated secretly. The history of the fifteen century records the efforts of Wyclif’s followers, known as the Lollards, who not only copied the Scriptures but were instrumental in their circulation.

During the fifteen century and the early years of the sixteen century several events of importance occurred. First was the invention of printing by moveable type credited to Johannes Gutenberg and the recovery of the knowledge of the Greek and Hebrew languages in the West after centuries of ignorance.

Thus when William Tyndale began his work of Bible translation in the 1520’s he was following in the steps of John Wyclif. But he had several advantages over Wyclif to produce a more readable and accurate translation: the ability to print his translation and the knowledge of Greek and Hebrew, the source languages of the Bible. However, the Bible produced by his translation was still illegal under English law and had to be smuggled into England. When these Bibles were discovered, they were burned and their owners charged with heresy.

As a result, during the lifetime of Tyndale the English Bible remained proscribed. His three or four editions of the New Testament, the Old Testament translation of the five books of Moses, and his translation of the Prophet Jonah done in his lifetime were considered outside the law.

During Tyndale’s imprisonment in the Vilvorde Prison from May 1535 until October 1536 that resulted in his trial and execution, his friend Miles Coverdale printed the first complete edition of the English Bible. He incorporated Tyndale’s translation of the New Testament and his work on the books of Moses into his Bible. For the remaining books of the Old Testament, it appears that Coverdale translated them from the Latin and German Bibles because he confessed that he was ignorant of the “languages.” Languages in this instance would mean the Greek and Hebrew.

After the death of Tyndale in October 1536, Coverdale printed the following year a revision of his complete Bible of 1535. However, that was not the only English Bible printed that year. John Rogers, the chaplain of the Merchant Adventurers in Antwerp printed another complete Bible. It is worth our while to know something of this man John Rogers and his work of translation and printing of the English Bible.

By his own account, when Rogers arrived in Antwerp around the year 1533 he was “an ignorant Papist.” There is good reason, however, to believe that his friendship with William Tyndale, then living in the Merchant Adventurer’s house, resulted in Rogers coming to faith in Christ. From that time, Rogers became a willing helper of William Tyndale although the exact nature of his contribution cannot be ascertained.

After Tyndale was arrested in May 1535 his rooms at the Merchant Adventurers’ house were searched and his effects were removed. However, it appears the ones who searched his rooms overlooked manuscript translations of the Biblical books of Joshua to Second Chronicles. These manuscripts came into the possession of John Rogers.

In 1537 Rogers printed his edition of the complete Bible and incorporated Tyndale’s translation of the historical books mentioned above. Thus for the first time, the historical books from Joshua to Second Chronicles were printed in the English language having been translated from the original Hebrew. For the other books that had not been translated by Tyndale, the Poetical books and the Prophets, Rogers used other sources including the Coverdale Bible.

As a means of honoring William Tyndale for his work of translation, Rogers had the letters WT printed in large letters after the book of Malachi in the Old Testament. Also in an attempt to conceal the identity of the translator, he used the pseudonym of Thomas Matthew. Most historians of that period believe the pseudonym of Thomas Matthew was in reality for William Tyndale. However, to acknowledge Tyndale as the translator would work against his Roger’s desire to have his Bible accepted in England. It is interesting to note that Rogers did include the initials IR following the dedication and introduction. Because the English letter “J” had not come into common use, the initial “I” was used. The initials IR are considered by most historians to stand for John Rogers. The Matthew’s Bible was printed in Antwerp and smuggled into England.

While Rogers was involved with the printing of the Matthew’s Bible, important changes were occurring in England. Henry VIII had broken with the Roman Church in 1534 and nominated himself as the Supreme Ruler of the Church of England. Thomas Cranmer was appointed to be the Archbishop of Canterbury after the death of William Warham and Thomas Cromwell assumed the role of Lord Chancellor. Both of these individuals favored the Reformation in England and were anxious for the Scriptures to circulate freely.

It has been reported that a copy of the Matthew’s Bible was secured by Cranmer and Cromwell and they were convinced that the opportunity was right to obtain permission for its circulation. They approached King Henry with the Matthew’s Bible and asked that he allow it to circulate to the people of England. Henry reportedly looked quickly through the Bible. He apparently overlooked the initials of William Tyndale that had been printed at the end of Malachi.

Handing the book back to Cranmer and Cromwell, he asked if there was heresy in it. Being assured by them there was none, he said roundly, then let it go forth to the people. Because the Bible was still considered illegal, it was necessary to print a strip of paper with the words, “Set forth with the King’s most gracious license” and attach it to the title page. Thus the Matthew’s Bible became the first English Bible to circulate officially in England after a period of nearly one hundred and thirty years.

The Van Kampen Collection copy of the Matthew’s Bible contains the strip of paper that was affixed to the title page. However, it has another distinguishing feature. Many of the pages of this Bible have dark stains on them. Various reasons for the stains have been suggested. Some believe that the stains are from the blood of its owner when he or she was put to death for the crime of owning it. Indeed, there is a notation in an early hand with the words that the book was probably owned by one of the early martyrs. That cannot be proven beyond the shadow of a doubt.

It is true to say that the exact source of the stains will never be determined definitively. But we are certain that many people were willing to die for their belief in the Word of God.

Regardless of speculation, the Matthew’s Bible has the honor of being the first English translation to circulate freely from the time of John Wyclif. The Matthew’s Bible is also a monument to the honor of William Tyndale, the primary translator who was willing to give his life that the people of England could have the Word of God in a language they were able to understand. How thankful we should be that we have the Word of God! How thankful we should be that people such as William Tyndale, Miles Coverdale, and John Rogers lived and labored so that we could enjoy the fruits of their works. May the story of the Matthew’s Bible encourage us to read the Word of God with diligence to understand God’s purpose and will for us!