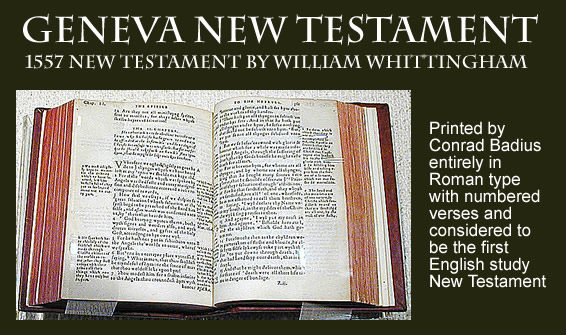 The Geneva Bible of 1560 is well-known to the English speaking people. It was the Bible of the Puritans and held the affection of the majority of the English people until well into the 17th century. For many years it proved to be even more popular than the King James Version initially printed in 1611.

It is necessary to begin with the historical context of the period between 1550 and 1560. King Edward VI, who never enjoyed good health, died in 1553. After an abortive attempt to place Lady Jane Grey on the throne, Mary Tudor became Queen of England. Fanatically attached to the old religion, Mary sought to rescind the Reformation begun by her father and to return the Church of England to the Roman obedience.

Far sighted individuals who saw what was about to take place decided to flee the country. Although it was said that these departures were for the purpose of maintaining commercial contacts with the mainland of Europe, the majority of the exiles left because of religious reasons.

One of these exiles was a man by the name of William Whittingham. In the absence of a definitive biography, he has attained almost legendary status. Some accounts state that he was fluent in seven languages and one could not discern which of the seven his native tongue was because his fluency in them was equal. Another account reported that he married the sister of Calvin’s wife and thus became his brother-in-law. How then can fact be separated from fiction in his life?

We know that he studied at Brazenose College, Oxford University although other accounts stated that he was a graduate of Christ College of the same university. Apparently he had received permission to go abroad to prosecute further studies. In one of the first recorded accounts, we find him at Frankfurt as part of a group of English exiles. The church started by the exiles was the scene of contention as one group demanded that the English Prayer Book be followed while another group, including Whittingham, preferred a more Reformed order of worship. The conservative group, under Richard Coxe, managed to win control of the church and the group favoring Reformed Worship went to Geneva. Included in this group was John Knox, the Pastor of the Church, who later would be the reformer of Scotland. Whittingham wrote an account of the controversy entitled A Relation of the Troubles at Frankfurt although his authorship has been questioned.

What is not at issue, however, is the fact of the Geneva New Testament of 1557 printed by Conrad Badius. There are a number of things that make this New Testament a ground breaker in the printing of the English Bible. We will list some of these features.

There were a number of English exiles in Geneva who established an English church in the city. Discussions were held relative to a revision of the Tyndale New Testament. This was the first organized committee dealing with the translation and printing of the English Bible. Tyndale had stated that he had no one to help him (counterfeit was his word) when he first started his work of translation. As matters stand, however, it appeared that the Geneva New Testament was the work of a single person, William Whittingham, although there were many other competent scholars in Geneva.

As far as the printing is concerned, the Geneva New Testament was printed entirely in Roman type which was a first although some books of the Tyndale Pentateuch of 1530 had appeared in a similar type. Also words not found in the Greek text were printed in italics to make the reading smoother.

It is impossible to answer this question with certainty. However, there are several things that might enable us to gain some understanding. First, this was the only edition of the Bible printed during the reign of Queen Mary. While it was printed in Geneva, its printing demonstrated to people in England that there were those who were convinced that the English people needed to have the Word of God in English and were continuing the work of William Tyndale. The Geneva New Testament was a pledge toward that goal.

We must also remember what was taking placing in Geneva at this time. There is reason to believe that the center of the English Reformation had been relocated to Geneva. Although not all the English exiles were in Geneva, there were many in other cities who were interested in what was taking place in England. That interest was not confined exclusively to the exiles in Geneva.

But why is the statement made that the center had been relocated to Geneva? It is because of many other things that were taking place there. Calvin and Beza had started the Geneva Academy where many would be trained to take the Gospel into France. Robert Stephanus, the Royal Printer to the King of France, who had been forced to flee to escape the clutches of the Inquisition, had taken up residence in Geneva. Stephanus was also an acute textual critic in addition to his work as printer. He would be a magnificent resource for questions dealing with the Greek text. But he was not the only notable printer who worked in Geneva. Conrad Badius and Rouland Hall were also there. Badius was the printer of the Geneva New Testament and Hall, an Englishman and member of the Royal Stationers of London, would print the first edition of the Geneva Bible.

Finally, and perhaps most importantly, the exiles, including William Whittingham, who worked on the English Bible in Geneva were men of faith. Although they were exiled from their country, they lived and worked for the day when the Word of God would have free course in their own country. The Geneva New Testament stands as a testimony to their faith and hope for better days.