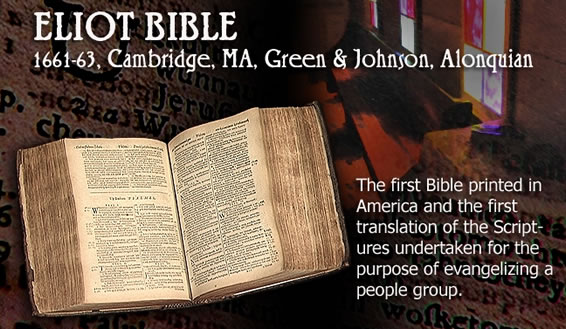 Eliot was born in 1604 in the midst of turbulent times in England. He attended Jesus College of Cambridge University and graduated in 1622. He was early drawn to associate himself with the Puritan party in England that was concerned to purify the Church of England from any beliefs and practices that were not contained in the Word of God. Charles I replaced his father as King in 1625. Charles, like his father James I, was zealous for the ceremonies of the Church of England that were a great offence to the Puritans. To carry out his program of uniformity, Charles appointed William Laud as the Archbishop of Canterbury. If Charles was zealous for uniformity, Laud was doubly so. He sought to bring the English clergy either to conform or have them deprived of office.

For some time after his graduation, Eliot was associated with Thomas Hooker, the godly Puritan pastor of Chelmsford in Essex as a school teacher at Little Badbow. Hooker was high on the list of preachers whom Laud wanted to silence. Hooker, realizing that it was just a matter of time before he would be apprehended, left England for the Massachusetts Bay Colony and settled at Newtown, afterward Cambridge, Massachusetts. Later Hooker would lead a number of his church members to settle Hartford, Connecticut.

Eliot realized there would be no place of ministry in England and decided to immigrate to the New World. In October 1631 he arrived in Boston, having traveled on the same ship with the wife of John Winthrop, the governor of the Colony.

Eliot’s gifts in preaching were well known and he was offered the position of teacher in the First Church of Boston. The Congregation system of church government provided for both a pastor and teacher. At the time, John Wilson, the pastor of the church, had returned to England to persuade his wife to accompany him back to Boston.

However, Eliot turned down this prestigious position to become the teacher at Roxbury where he co-labored with Thomas Weld. Most students of Eliot’s life believe that he had made previous arrangements to be a pastor/teacher of another group from England who were planning to come to the New World.

In the event, Eliot became the teacher at Roxbury in October 1632 and would remain in his position until 1690 when he died. So for fifty-eight years, Eliot preached and taught at Roxbury. In the meantime, Thomas Weld was sent back to England by the New England churches to raise support for the colony because it was facing severe financial hardship. So for a number of years Eliot had the sole responsibility for the church.

However, it was not his ministry to the English settlers at Roxbury that we wish to discuss but rather the vision that he had to reach the indigenous people who lived close by. One of the major reasons for the settlement of the Massachusetts Bay Colony was to proclaim the Gospel to the Indian peoples.

As early as 1636 Eliot began to visit the Indians to learn their language and preach the Gospel to them. In 1649 Eliot made the decision to translate the Bible into their language. However, the Algonquin people did not have a written language. Thus it was necessary for Eliot to give them all the tools of literacy.

Although we do not have the space to rehearse all the details of the translation and printing of the Algonquin Bible, it is an epic story of perseverance. With the help of John Sassamon, the translation was finally completed. Meanwhile news of what Eliot was attempting reached England. The Society for the Propagation of the Gospel in New England, one of the first, if not the first, Protestant missionary society aided in the printing. They sent a press to Cambridge for the printing of the Bible and in addition, a printer by the name of Marmaduke Johnson.

To aid the people to read the Bible, Eliot also prepared grammars and primers in their language.

The subsequent history of the Algonquin Bible is a mixed one of tragedy and success. In 1675 a terrible war known as King Philip’s War erupted between the native people and the colonists. The reasons are complex as to what caused war, but the Indians who had been evangelized by John Eliot were caught up in the hostility. Previous to the outbreak of the war, they had petitioned Eliot and the colony for permission to lead a more settled life. They had been placed in villages known as “Praying Villages” because the Indians had come to be called “Praying Indians” due to their profession of Christianity. However, despite their profession, they were viewed with suspicion by many of the other colonists who were fearful they would join King Philip’s army.

At a half an hour’s notice, they were commanded to leave their villages. They were taken to a resettlement camp located on Deer Island in the middle of the Massachusetts Bay. Eliot and his friends did what they could to help them through a bitter winter, one of the coldest on record. Many of the Indians did not survive because of their lack of nourishment and exposure to the weather. However, Eliot recorded that no word of complaint ever issued from their lips.

However, the spiritual effect of the resettlement was devastating to the work of Indian missions. Because they were taken away without time for adequate preparation, many of the Bibles were left behind and later destroyed by the marauding bands of Indians who associated the Bibles with the White Man’s religion.

In Eliot’s words, the spirit of prayer was broken among the Indians and never was recovered. Although a reprint of the Bible, over strenuous opposition, was done in 1685, the work of the Holy Spirit among the Indians never truly regained its momentum. Later, a request for a third printing of the Indian Bible was rejected.

According to most sources, there are approximately eighteen of the Algonquin Bibles that remain today. The copy in the Van Kampen Collection is one of the eighteen although there is good evidence to believe that it was compiled out of two incomplete ones. The majority of the copies that survive were presentation copies that were sent to the English Universities and to King Charles II. The presentation copies have two title pages, one in the English language and the other in the Algonquin language. The Van Kampen copy contains just the Indian title page.

As one looks at the Eliot Bible, it is evident that it illustrates the two priorities of Eliot’s life and ministry: the value of the Word of God and the value of a man’s soul. Both will live forever.

Let us permit John Eliot himself to have the final word concerning the motive for his work in translating and printing the Bible in the language of the Algonquin people. In a letter written to Thomas Thorowgood in 1660 containing his ideas concerning the origin of the Indian people and even before the Bible was printed, he revealed his reasons for engaging in the work:

The godly undertakers of this plantation had it so much in their hearts, to make the conversion of the Indians one end of their coming, as that they made it one clause in their patent, which did lay a publik ingagement upon us thereunto: and when God was pleased to put me upon that work of preaching to them, that publik ingagement, together with pitty to the poor Indians, and desire to make the name of Christ chief in these darke ends of the earth, and not the rewards of men, were the very first, and chief movers, if I know what did first, and chiefly, move in my heart.